I grew up in Xinjiang in northwest China.  It seemed like an accident we came to Portland, the northwestern of United States, but more and more I believe that it is God’s plan.

When I was pursuing my Ph. D. degree at Tsinghua University, I did not know what my next goal was. The more I thought, the more I felt that there was no goal in the world that would satisfy my heart and attract me to live for it. In the painful experience of hopelessness even to death, I came across a group of missionaries who lived completely different lives: They came to China to learn the language, spread the gospel, and sow the seeds of love and grace. This was something I had never seen before, and I was deeply attracted to their lives. I soon realized that my life should be as meaningful as they were. I wanted to be like them: a person with faith, hope, love, and inner strength.  Therefore, I put my trust in Christ and was born again.

When I graduated in 2000, I wished to serve God as a missionary, but I asked Him to give me ten years to explore the world and to gain different experiences in my life.  God gave me a job in Germany.  Two years later I was sent back to China to develop the Chinese market. I got impressive result all the way.  Several years later, I married Jessie and we served together in the church in Beijing.

But when the company considered promoting me as their Sales Director, I did not know why I was not happy. I just felt that this was not for me. I suddenly remembered my agreement with God.  It was exactly 10 years ago!  My pastor advised me to go to the seminary, but I was reluctant to let go of my job and I felt that I could handle both together.   I struggled with this for nearly a year, until one day I was awakened, as if I heard a passage from the scripture, this was something I had never experienced before. Searching the Scriptures in a hurry and I found Luke 9:62:  Jesus said to him, “No one who puts his hand to the plow and looks back is fit for the kingdom of God.”  I was so ashamed in my heart, I only had to surrender to God. After I shared with my wife, she strongly supported me and I resigned from my job that many people envied.  And we came to  Western Theological Seminary in Portland in the fall of 2011.

When I first came to Portland, the incessant rain challenged my faith and calling.  One day I climbed up the hill in the rain, overlooking the city of Portland.  I did not know how, but Deuteronomy 11:11-12 came to my mind. “But the land that you are going over to possess is a land of hills and valleys, which drinks water by the rain from heaven, a land that the Lord your God cares for. The eyes of the Lord your God are always upon it, from the beginning of the year to the end of the year.”  It seemed like Portland was the land that God cares for, and I quickly settled down to study.

What’s good about Portland? We did not know anything before we came. My wife searched the web, and got a very funny introduction, saying that Portland had a warm climate and was suitable for birth. We had been married for many years but without children.  We had a little bit of good feeling towards Portland and were full of expectations.

More than a year later, nothing happened. Parents from both sides urged us to abandon our studies to return home and seek medical help to solve the big issue of life of having children. After all, I was already forty. We had booked our air tickets and packed our luggage to return home. However, two weeks before departure, we discovered that my wife was pregnant. We believed that this was a miracle so that we could settle down and to be equipped here.

Upon graduation from the seminary, we were eager to return home, but were approached by NAMB (North American Mission Board) if we would consider serving as church planters.  The Chinese population of Portland had grown rapidly, tens of thousands of immigrants from the Mainland have not believed in Jesus, nor attending any church.  In the process of patiently seeking God’s guidance, He reminded me of Deuteronomy 11:11-12. At this time, God gave us another daughter and  it strengthened our determination to stay and plant church.

Surprisingly, we got our R1 visa in only a month.  We moved to our target area, Beaverton – where Intel’s largest campus, as well as Nike’s headquarters are located.  One month after my second daughter was born, we were fortunate to find a classroom in an Anglo church and we began our gathering. Our vision had gradually become clearer.  From our own experiences and observation, we find that people’s lives are constantly busy and are dragged by the world. Many Christians are no exception. If the values ​​of life were not truly changed by knowing Jesus, they will inevitably be affected by this world, in bondage, living a life that is exhausting. We hope to help people see new life through faith (2 Corinthians 5:17) and they will be truly free to live in Christ (John 8:31-32), therefore we named the team as Portland New Creation Fellowship.

In the first year of the gathering, the spreading of the gospel and rapid development that I wished for did not happen. The Bible study with less than 10 people was very unstable. It seemed that no matter how I tried, there was no breakthrough.  However, when I was disappointed with myself, God began to work to let me see his power. A spring picnic attracted more than 30 young people, and half of them came to the Bible study. Five people were moved to be baptized a few months later. I was shocked and was greatly encouraged. In the next two years, nine more people were baptized.  It was a development I did not expect. God’s work was so amazing.  The rebirth of everyone reminds me once again that it is God who is working.

When we have more people, we face greater challenges. We needed people to serve together. However, it was just me and my wife who serve most of the time.  Inevitably, we felt lonely, bitter, and frustrated.  Coupled with the uncertainty of our permanent residence status, and the increase pressure of raising children, we sometimes become worried and weak. Yet, God constantly encourages us through some pastors, conferences, and people who care about us. He shows his abiding love and grace. He also granted us the green card, which was rejected once before.  It strengthened our conviction to stay put and serve.

My wife and I gradually understand that building a church is not a project that can be completed in three to five years. It must be changed lives living together in Christ; and the change and growth of life is not a matter that could be hurried.  It is especially difficult for immigrant from an atheistic and Chinese cultural background. We must understand the actual struggles they face, and while we have experienced such struggles, but blessed by the gospel than we can really care for them, more than caring about the increase in number, then we can accompany them through all sorts of difficulties in the love of Jesus and bring them one by one to rest in the Lord’s grace, and then gradually connect them with one another in love to become a church. Many of the preset church planting strategies and methods did not work for us. The important thing is that we live the good lives of the newly created people in Christ and follow the Holy Spirit to cultivate the disciples of the Lord Jesus and build them up in the Word of God.

It has been several years now, but we still face a lot pressure around us that we must exercise our faith.  It let us know more and more that if we do not believe in God, we can do nothing. We thank God that gradually we see some seedlings who will grow up as disciples, and some members who are willing to serve and share our workload.

As I reflected upon my journey, there were only two of us when we first arrived in Portland. Now we have become a family of four. When we started to plant a church, it was only a group of five to six people. Now there are fifty or sixty people worshipping on the Lord’s day. God has never stopped working.  He does not withhold His grace. He is the God who gives life to the dead and calls into existence the things that do not exist. (Romans 4:17) He is also the God who says: “Be fruitful and multiply and fill the earth. “ (Gen 1:27-28) He will accomplish his ordained things and establish His own church!

I will walk with God. He has more wonderful guidance and blessings to give us! Are you willing to join us?

You can join God in the ministry of the starting up of the first Mandarin Baptist Church in Oregon through prayers, short term mission trips, offering, or even personal participation! 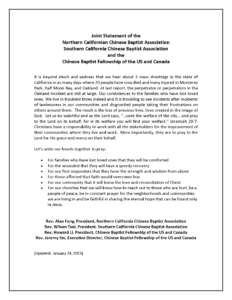 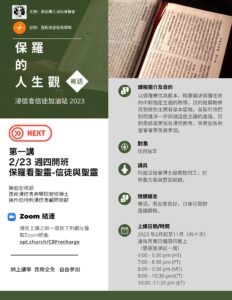 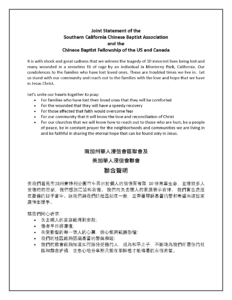 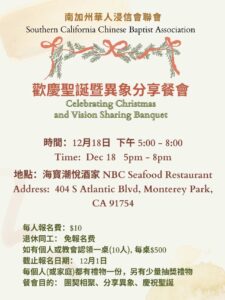